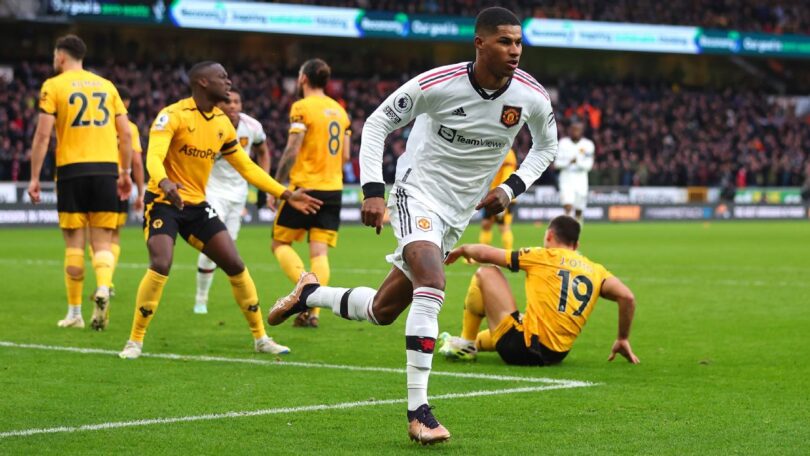 Wolves (Agencies): Marcus Rashford came off the bench to score a late winner in Manchester United’s 1-0 victory at Wolves on Saturday.
The forward was dropped from the starting lineup for unspecified “internal disciplinary” reasons, according to manager Erik ten Hag.
However, the England international was brought on after half-time and his strike earned a crucial win for United.

The result sees United climb into fourth place in the Premier League while Wolves remain in the relegation zone.

“He [Rashford] was bright, he was lively and he scored a goal to give a good reaction,” Ten Hag told BT Sport. “Everyone has to adhere to the rules and if you react like this, it is the right answer.

“We were not that good in the first half. In my opinion the second half was better. I was not happy at halftime and I told them with this attitude they will not win this game and everyone had to give 10% more.”

Alejandro Garnacho, who was brought in to replace the bench Rashford, had a big chance after 17 minutes when he pounced on Nelson Semedo’s mistake but saw his effort saved by Jose Sa.

United posed the greater threat in the first half and should have led going into the break but Anthony Martial couldn’t connect with a header from close range. Rashford was brought on for Garnacho at half time and United’s performance began to improve.

Sa was called into action again early in the second half as he smoothered Antony’s shot inside the box. Moments later, David de Gea pulled out his first meaningful save of the game from Ruben Neves’ long-range free kick.

United managed to break the deadlock after 76 minutes when Rasford played a one-two with Bruno Fernandes before smashing the ball past Sa. Rashford thought he grabbed a second with five minutes remaining but his effort was ruled out by VAR for handball.

Raul Jimenez thought he grabbed a late equaliser but his header was brilliantly saved by De Gea as United held on for the win. “The goals are coming after good work and we are working as a team in and out of possession,” Julen Lopetegui said. “Maybe we didn’t have the best decision making in the box. We had five or six good situations to damage them but we had good chances.”