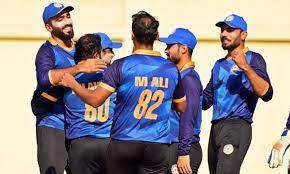 LAHORE: An incredible display of leg-spin bowling from Usama Mir took Central Punjab to the final of the Pakistan Cup 2022-23 with a thumping 82-run win over Southern Punjab at Karachis State Bank Stadium.

According to information made available here by the Pakistan Cricket Board, Usama, who became the leading wicket-taker of the tournament in the process, took five wickets for only 23 runs in 5.1 overs with one of them being a maiden.

Southern Punjab were set 232 to win as Tayyab Tahir and Bilawal Bhatti scored fighting half-centuries, but the Usman Salahuddin-led side crumbled in the chase and were bowled out for 149 in 32.1 overs with teenager Arafat Minhas being the top-scorer with 39 off 26. Central Punjab captain Aamer Yamin and Zafar Gohar took two wickets each.

Earlier, Central Punjab had a wobbly start as both their openers were sent back to the pavilion with just 12 on board, but a crucial 62-run partnership between Junaid Ali, who made 23 off 33, and Tayyab (58 off 56, four sixes and two fours) took them out of trouble.
Zafar scored 37 off 54 and Muhammad Irfan Khan made 32 off 51, before Bilawal smashed 51 not out off 48 in an innings that included four fours and two sixes.

Central Punjab were bowled out for 231 with four balls spare as Sharoon Siraj, Faisal Akram, Hassan Khan and Mohammad Ilyas took two wickets each and Mohammad Ismail accounted for a batter.

Central Punjab’s opponents for the 3 January final will be decided on Sunday when Balochistan – the defending champions – take on Khyber Pakhtunkhwa.
Scores in brief: