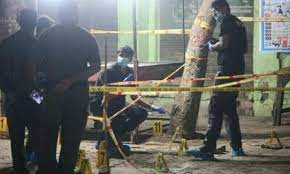 Talking to the media at the Lahore High Court, he said that Wazirabad JIT was not formed under any law or the constitution and the people were being kept in illegal custody in the name of attack case. He said that two workers of Pakistan Muslim League-Nawaz Mudassar and Ahsan, who are real brothers, were arrested by the police in last two months but their custody was being denied, whereas, video footage of their arrest was available. He said that it was a very dangerous trend to keep the people in illegal custody, without declaring their arrest and producing before the court. “We approached the Lahore High Court against their illegal custody, who had sought a report from the DPO Wazirabad about the matter, within 15 days”, he added.

the brothers, adding that they were peaceful citizens and there was no police record against them.

He said that Lahore Capital City Police Officer Ghulam Mehmood Dogar, who also heads the Wazirabad JIT, had a special mindset. He said that the JIT head had kept Mudassar and Ahsan in illegal custody as no progress was being made in investigations of the Wazirabad incident. Can anybody question Ghulam Mehmood Dogar that why he kept the two sons of a mother in illegal custody, he questioned.
Criticizing, he said that Moonis Elahi, wanted to please Imran Khan by subjecting such innocent persons to oppression. He said that Punjab police wanted to make a case of missing persons, while appealing to the inspector general of police (IGP) Punjab to take notice of the situation.

If you wanted to declare their arrest then do so, he said, adding that the approach of picking up innocent persons and keeping them in illegal custody would not work any longer.

He said that green areas had been abolished in the master plan of Lahore and illegal housing societies were regularized. “You are playing in billions and doing corruption but fear the complaint of the mother whose two sons were kept in illegal custody”, he added.
He said: “We will not remain silent until Mudassar and Ahsan were either

released or produced before the court”, adding that a delegation would also meet the IGP in this regard as he was head of the police and also answerable in the matter,

He said that if Moonis Elahi wanted to please Imran Khan then he must do it but illegally detained brothers should be returned to their mother. He said that millions of rupees were transferred from accounts of Chaudhry Pervez Elahi and Moonis Elahi, adding that investigations were in progress and they had to give account of it. (APP)