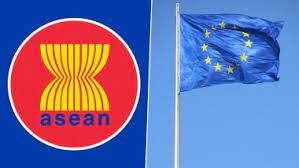 The Indo-Pacific is the strategic theatre where the future of our planet will be written, as I argued in a recent speech. At the confluence of two oceans, it is a region on the rise, where two key global trends are coming together: US-China strategic competition and the weaponisation of interdependence.

This region is home to 60% of the world population, produces 60% of global GDP and contributed to two-thirds of pre-pandemic global economic growth. As EU we have to invest more time and resources in playing a full role in and with the Indo-Pacific region.

At the centre of the Indo-Pacific there is ASEAN, a fellow regional organisation that supports effective multilateralism and a rules-based international order. For the first time ever, the leaders of ASEAN came to Brussels this week to meet for a Summit with the leaders of the EU.

It was a politically significant moment: in a world where great powers are throwing their weight around, the EU and ASEAN sent a message of wanting to join forces. And although Philippines’ President Marcos may have blamed our winter weather for coming down with a cold, the welcome given to ASEAN was a warm one.

Along with the EU-ASEAN region-to-region meeting, we also had a lot of bilateral meetings: I met the Foreign Ministers of Cambodia, Viet Nam, Indonesia, Malaysia, Thailand, and Laos. I also signed important Partnership and Cooperation Agreements with Malaysia and Thailand.

ASEAN has experienced decades of strong growth and is now on track to become, as a group, the fourth largest economy in the world by 2030. The EU is already ASEAN’s first development partner, its second investment partner and its third largest trading partner. (For more stats and facts, see this factsheet). So logically, economic themes loomed large in our discussions.

We celebrated the signing of the EU-ASEAN Comprehensive Air Transport Agreement. This is the world’s first bloc-to-bloc agreement liberalising aviation. It will lead to more flight options for both passengers and cargo, and hence more competitive prices.

Connectivity is a buzzword globally and in South-East Asia there is a true ‘battle of offers’ going on. The EU is a connectivity superpower and ASEAN knows this. In the EU we have years of experience in abolishing borders.

ASEAN’s integration goal and methods are very different from ours, for example when it comes to majority voting or the size of the common budget. Still, we have been supporting ASEAN for many years in their ‘community building’. We have worked both on the hardware side of connectivity and the software, ie regulatory dialogue and support. At the Summit, we announced a dedicated €10bn investment package under the Global Gateway to promote sustainable investment across the region.

At the bilateral level, the EU has free trade agreements with Singapore and Vietnam and negotiations with Indonesia are also underway. Indonesia has the biggest economy in ASEAN and there is a lot of upside potential. We have reaffirmed at the Summit a future EU-ASEAN FTA as a common long-term objective.

Energy, climate and the green transition was a second big theme at the Summit. Many ASEAN countries remain highly dependent on fossil fuels and look for greater incentives to enhance their ambitions to combat climate change. In the absence of any significant decarbonisation, CO2 emissions in the ASEAN region would almost double by 2040. In addition, EU green agenda policies are sometimes received with scepticism or labelled as protectionist. We have to take these concerns seriously and invest in real dialogue when we devise our energy and climate policies.

So it was good to discuss how we can advance together with the necessary green transition and we had plenty of concrete deliverables in this area: the launch of the Just Energy Transition Partnership (JETP) with Vietnam; plus the launch of a dedicated Ministerial Dialogue on Environment and Climate Change, the start of the ASEAN-EU Energy Dialogue, and  other initiatives listed under the EU-ASEAN Plan of Action (2023-2027) which was launched at the Summit.

Thirdly, the EU and ASEAN have a geopolitical interest to collaborate. In this region which prefers not to choose between the two big powers, opinion polls show the EU as the second  most trusted and preferred partner (after Japan), to hedge against the uncertainties of the US-China rivalry.

The message from the EU was one of sustained commitment to the region and a willingness to engage more, especially in the area of security. We expressed our common resolve on maintaining and promoting peace, security and freedom of navigation and overflight at the South China Sea, in accordance with international law and, in particular, the UN Convention on the Law of the Sea. We also have a dedicated project to enhance security cooperation in and with Asia (ESIWA) to work on cyber issues, maritime security, or counter-terrorism.

Myanmar, ruled by a military junta, was absent at our Summit. But as ASEAN steps up its engagement with all stakeholders to find a way back to a democratic path for the country, I made a clear offer from the EU to support ASEAN in ways which they think will be of most help.

Naturally, Russia’s brutal war against Ukraine featured prominently in our discussions. Despite the range of views among them, ASEAN as a group has for the first time agreed at our Summit to state that most of its members deplores in the strongest terms and condemns the Russian aggression against Ukraine and demands its complete and unconditional withdrawal from its territory.

When ASEAN Chair, Prime Minister Hun Sen, opened the Summit speaking of multilateralism being under severe strain with global peace threatened by “state action blatantly violating universally recognised international law, norms and principles,” we all knew what he was referring to. And everyone around the table agreed on the need to uphold the UN Charter including its core provisions on territorial integrity and the non-use of force, including of nuclear weapons (full joint leaders’ statement here). After all, many of the current generation of ASEAN leaders have their own personal experience of wars and conflict.

Amid all the chaos and crises of our world, it was good that we took time this week to engage with ASEAN, a strategically important partner.