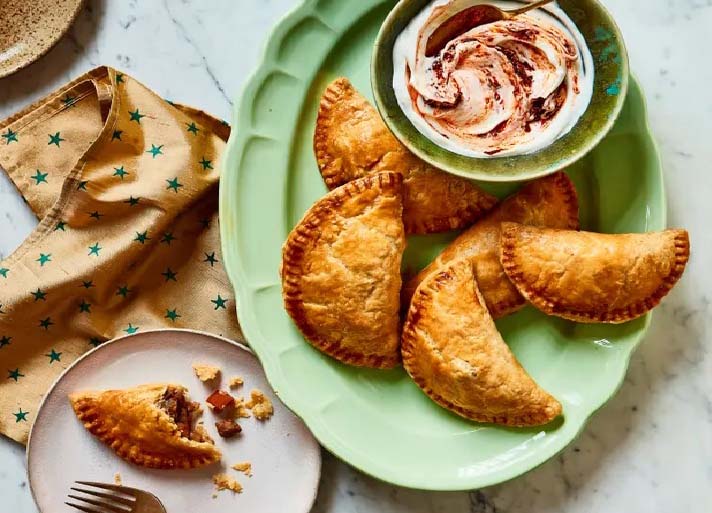 Isn’t it time we looked at leftovers in a different light? They are tidy packages of beautifully seasoned ingredients prepped, cooked, ready to go and perfect for making something new when you are short of time and inspiration. Christmas leftovers are a thing of joy, and a readymade filling for these empanadas. Whether you buy the pastry or make the dough from scratch, the joy here is in the rich, glorious flavour of the filling.

Sage, allspice, pancetta and garlic turn cooked turkey and leftover root veg into something rather special.

To serve
Smoky harissa, or other chilli relish
Greek yoghurt

First make the pastry – the ingredients must be as cold as possible for a light and crumbly result. Sift the flour and salt into a mixing bowl. Add the butter and lard and swiftly rub them into the flour until half is mixed into crumbs and half are still in small splinters. Add four tablespoons of cold water, quickly knead until it comes together into a ball, flatten into a rough disc, wrap and refrigerate for an hour.

Now the filling: place a large frying pan over a medium-high heat and, once hot, add the oil and lower the heat to medium. Add the onions and pancetta and cook for five minutes until the pancetta starts to render out its fat. Add the carrot, parsnip, garlic and spices and keep cooking for seven to eight minutes, until the onions are soft and the veg have a little colour. Add the wine, cover and cook for about 10 minutes, until the vegetables are just tender. Stir in the sage and the turkey and taste, checking for seasoning, before chilling in the fridge. Line two trays with parchment paper or silicon.

Remove the pastry and filling from the fridge and heat the oven to 190C (170C fan)/375F/gas 5. Roll the pastry out on a floured surface, to the thickness of 3-4mm. Use a 10 or 12cm round cutter to cut into circles and fill each one with a generous tablespoon of filling. Fold them over into half moons and use a little water to seal them, crimping the edges with a fork. Lay out on the baking trays, brush with the egg (you can put the rest into an omelette) and then bake them for 20-25 minutes until golden and crisp.

Swirl a few tablespoons of harissa into a bowl of yoghurt and serve this with the hot empanadas.

The simple flex
For vegetarians, replace the lard with the same quantity of butter, and use shredded sprouts and chestnuts in place of the pancetta and turkey.