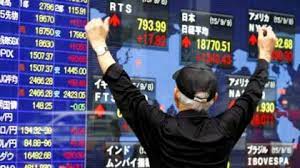 TOKYO (AFP): Tokyo stocks surged at the close on Monday, following Wall Street rallies, while a lull in the yen’s appreciation against the dollar also supported the Japanese market.

The dollar slipped to 129.06 yen in the early afternoon before recovering to 129.70 yen in the late afternoon in Tokyo. The levels compared with 129.51 yen on Friday in New York.

Global investors were encouraged as US Federal Reserve officials reiterated that the central bank may lift rates at a slower pace as inflation gradually comes down.

“After US gains, investor sentiment further improved and buying went to a broad range of shares,” IwaiCosmo Securities said.

Market players were also monitoring speculation that the Bank of Japan could move towards monetary tightening after Governor Haruhiko Kuroda’s term expires in April.

“Although most Asia markets are closed for Chinese Lunar New Year celebrations, Japanese and Australian stocks are picking up on the better mood from US investors and on expectations of China’s economy returning to some semblance of a pre-pandemic trend,” he said.

Construction equipment maker Komatsu, which also has a major presence in Asian and Chinese markets, rose 1.39 percent to 3,019 yen.

Nissan added 0.86 percent to 434.1 yen after reports said the French government supports plans being discussed by the Japanese carmaker and Renault to rebalance their alliance, including reducing Renault’s 43.7 percent stake in Nissan.