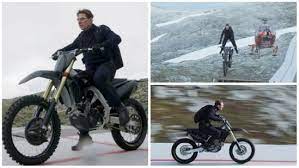 He will be seen jumping off a steep cliff with a motorcycle in the upcoming series ‘Mission Impossible 7’.

Taking to his social media handles Twitter and Instagram he shared the dangerous moment with his fans.

Tom said, “This is far and away the most dangerous thing we have ever attempted. This will be a motorcycle jump off a cliff into a base jump. I have wanted to do this since I was a kid.”

“Coming up with the stunt is just one of the challenges. The other is to put a camera to film it from the right angle.” The stunt crew then details that Tom did 500 skydives and 13,000 motocross jumps to prepare for the stunt.

“I can’t end this year without thanking you guys,” adds the actor. Thank you guys for coming to the theaters in large numbers and supporting Top Gun: Maverick.

The movie is stated to be released in cinemas in 2023.