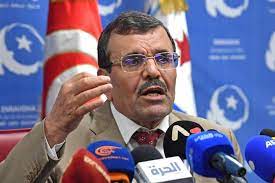 “The investigative judge issued a prison decision against former Prime Minister Ali Laarayedh in what is known as the deportation jihadists file,” lawyer Ines Harrath said.

Ennahda denied in a statement accusations of terrorism, calling it a political attack on a foe of President Kais Saied to hide “the catastrophic failure of the elections.”

Only 11.2 percent of Tunisian voters cast ballots in Saturday’s parliamentary elections, Farouk Bouasker, the head of the electoral commission said, after most political parties boycotted the vote as a charade to shore up President Kais Saied’s power.

After the turnout figures were announced, major parties, among them the Salvation Front, which includes Ennahda and its arch-rival, the Free Constitutional Party, said Saied had no legitimacy and should step down, calling for massive protests.

Ennahda, the main opposition party, has accused Saied of an anti-democratic coup since he seized most powers last year, shutting down the parliament and moving to rule by decree, powers he has largely formalized with a new constitution ratified in a July referendum.

Security and official sources estimated that around 6,000 Tunisians traveled to Syria and Iraq last decade, to join jihadist groups including Islamic State. Many were killed there while others escaped and returned to Tunisia.