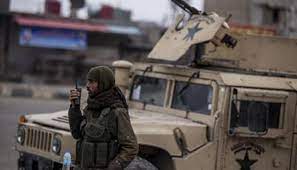 DAMASCUS (AP): Syria’s military said two soldiers were wounded in Israeli airstrikes that hit near Damascus, the country’s capital early on Tuesday, the first such attack in more than a month.

A military statement said there were also some “material losses” in the strikes and that Syrian air defenses intercepted and shot down a number of the missiles.

A Britain-based opposition war monitor, the Syrian Observatory for Human Rights, said the Israeli airstrikes targeted a warehouse in the Damascus suburb of Sayyida Zeinab, killing three “non-Syrian nationals” who were affiliated with the Iran-backed Lebanese militant group Hezbollah.

The Observatory added that the airstrikes targeted positions of Iran-backed militias allied to the Syrian government.

The last reported Israeli attack in Syria was on Nov. 13. It killed two Syrian soldiers and wounded three at an air base in the province of Homs.

Israel has carried out hundreds of strikes on targets inside government-controlled parts of Syria in recent years, but it rarely acknowledges or discusses specific operations.

Last week, Israel’s military chief of staff strongly suggested that Israel was behind a Nov. 8 strike on a truck convoy in Syria.