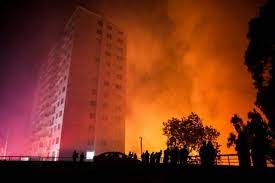 CHILE: At least two people died and some 400 homes have been damaged or destroyed in a fire that broke out Thursday in the Chilean seaside resort of Vina del Mar, prompting the government to declare a state of emergency.

The flames, fanned by strong gusts of wind, spread from the upper areas of town down ravines and hills in the span of just a few hours to the lowest and most inhabited sections of the city, located some 120 kilometers (75 miles) from Santiago.

The blaze, which has already burned some 110 hectares (270 acres), has a “rapid spread, high heat intensity and dispersion,” the National Emergency Office (Onemi) said.

Several neighborhoods and one informal settlement were ordered evacuated.

“The president of the republic has instructed the declaration of a state of constitutional exception of catastrophe due to public calamity” in the Valparaiso region, where Vina del Mar is located, said Manuel Monsalve, assistant secretary to the minister of the interior.

“There was a very quick response to the beginning of the fire but despite this, as a result of the location where the fire developed, the weather conditions, the wind and the presence of combustible material, it spread very aggressively and quickly,” Monsalve said.

The fire was fanned by wind gusts of 40 to 50 kilometers (25 to 30 miles) per hour, which has complicated work for firefighters and forest rangers.

Four hundred firefighters and 150 forest rangers are fighting the fire, alongside several units from the Santiago metropolitan region.

The city s fire commander, Patricio Brito, confirmed the deaths of two people and revised the number of damaged homes from 200 to 400.

Boric tweeted to those affected “we will not leave you.”

“Our priority as the Chilean government is the safety of the people and we will continue deploying all the necessary resources to control the emergency,” he said.