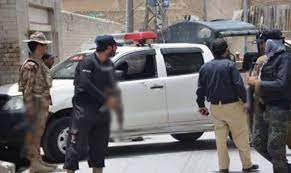 In the latest attack on law enforcers, the terrorists opened fire at a police checkpost on Nowshera Road in Dheri Zardad, Charsadda District Police Officer Sohail Khalid told media. The attack left three policemen injured, who were shifted to the District Headquarters Hospital. However, two policemen succumbed to their injuries while one was under treatment, the police said.

According to police, the terrorists escaped the site of the attack following a retaliatory fire during which one of them was also injured, search for whom is currently underway. Following the attack, a heavy police contingent reached the site and began the search operation on a large scale, the police said.

Martyred policemen include constables Imran and Rameez, while the third law enforcer Yousuf Ali was shifted to Peshawar due to critical injuries. The Dheri Zardad attack comes as Pakistan fights rising terror attacks — especially by the outlawed Tehreek-e-Taliban Pakistan (TTP) and from across the Afghan border. According to reports, the TTP regrouped in Afghanistan after the Taliban’s takeover, with Pakistan repeatedly asking the interim government in the neighbouring country to ensure that its soil isn’t used for terrorism. But the Taliban-led government has not been able to live up to the expectations.