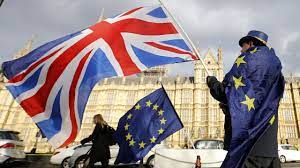 London (AFP): Two years after Britain’s departure from the European Union, bosses of UK businesses are reeling from the cost of Brexit, including some who voted to cut ties with Brussels.

“It’s cost, cost, cost with no benefit,” noted Adrian Hanrahan, chief executive of a small chemicals company, Robinson Brothers, based in central England and for which the EU remains a key market.

The problem is not the customs duties, largely eliminated by the post-Brexit free trade agreement between London and Brussels, but rather a mountain of new regulatory paperwork.

“We’ve added probably 25 percent extra now on our administration costs just to cope with the changing paperwork… of getting stuff in from the EU and out of the EU,” Hanrahan told AFP.

Robinson Brothers exports around 70 percent of its products, of which more than half goes to the EU. The company is far from alone in struggling with the consequences of Brexit, with 56 percent of UK businesses facing difficulties adapting to new trading rules, the British Chambers of Commerce said Wednesday.

“Businesses feel they are banging their heads against a brick wall as nothing has been done to help them,” said BCC director general Shevaun Haviland.

“The longer the current problems go unchecked, the more EU traders go elsewhere, and the more damage is done.”
The government of Prime Minister Rishi Sunak has said it believes the UK economy has entered a recession on fallout from sky-high inflation.

While it repeatedly blames this on Russia’s invasion of Ukraine fuelling energy prices, analysts claim Brexit has also pushed up costs.
“There’s good causal evidence that the depreciation of sterling immediately following (the 2016 vote for) Brexit led to higher inflation, specifically for goods we import a lot of,” London School of Economics researcher Nikhil Datta told AFP.

He added that new trade deals, such as the one struck with Australia, “have been tiny”.

Bank of England monetary policy committee member Swati Dhingra told MPs last month that Brexit was to blame for “a much bigger slowdown in trade in the UK compared to the rest of the world”.

According to King’s College London economist Jonathan Portes, “there is a reasonable degree of consensus that Brexit has reduced UK trade by perhaps 10 to 15 percent compared to a no-Brexit scenario”. The government’s own economic forecasting body, the OBR, estimates that Brexit will reduce the country’s long-term output by around four percent.

Complicating matters has been the loss of EU workers in sectors such as health, hospitality and agriculture, even if some of those returning home have been replaced by staff from non-EU countries.

Witnessing the fallout, some high-profile bosses who voted for Brexit are calling on the government to relax the new and tighter immigration rules.

“In respect to immigration, it’s definitely not the Brexit I wanted,” Simon Wolfson, head of clothing giant Next, told the BBC last month.
Tim Martin, boss of pubs group J D Wetherspoon, is of a similar opinion.

For Hanrahan, Brexit fallout has led questioning whether his company can survive.

“If this continues, then we have no other option but to shrink our offering to remain in business. “We’ve had two or three very large German customers tell us that they’re no longer going to come to us because it’s too complex for them to work with anybody in the UK.”