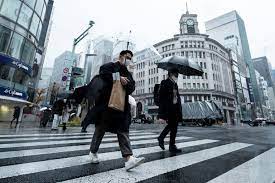 Prices jumped most for processed food items but were also higher for electricity and durable goods like air conditioners. Rises in gasoline costs were tempered by government subsidies. The November figure is well below the sky-high levels that have sparked concern in the United States, Britain and elsewhere, but far exceeds the Bank of Japan’s long-term goal of 2.0 percent.

Even excluding fresh food and energy, the index was up 2.8 percent.

The headline core consumer price index (CPI) has risen consistently since the beginning of the year, putting pressure on the Bank of Japan to tweak its longstanding monetary easing policies. The US Federal Reserve and other central banks have sharply hiked interest rates this year to tackle inflation. But Japan, which since the 1990s has swung between periods of sluggish inflation and deflation, has gone against the grain and continues to keep interest rates at ultra-low levels as it tries to kickstart its economy.

The Bank of Japan says it sees the recent price increases as temporary and that there is no reason to change course yet.
The starkly different approaches taken by the BoJ and the Fed have driven down the value of the yen against the dollar this year from around 115 yen per dollar in March to as low as 151 yen. The currency has recovered somewhat, helped by government interventions. This week, the Japanese central bank delivered a shock tweak to its ultra-easy monetary policy, prompting the yen to strengthen rapidly.