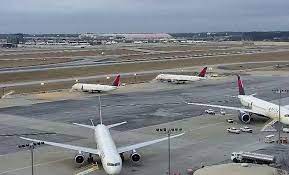 LONDON (BBC News): Normal air traffic operations are resuming gradually in the US after hours of delays, the Federal Aviation Administration (FAA) says.

It follows a problem with the system that alerts pilots to potential hazards on flight routes.

The FAA had said flights would take off again from 0900 ET (1400 GMT). It said it was continuing to look into the cause of the problem.
Flights already in the air were allowed to continue to their destinations.

Flights from New Jersey’s Newark airport, and Hartsfield-Jackson Atlanta International Airport resumed slightly ahead of others due to air traffic congestion in those areas.

Authorities are expected to impose a ground delay programme in order to address the backlog of flights which were halted for hours.
US President Joe Biden has been briefed, and the White House said there was no evidence of a cyberattack “at this point”.

Speaking to reporters, the president said the FAA “expect [that] in a couple of hours they’ll have a good sense of what caused it, and we’ll respond at that time”.

In a tweet, the White House Press Secretary said the president had called for a “full investigation”.

The FAA said the source of the problem was its Notice to Air Missions System.

Major US airlines said they were closely monitoring the situation. American Airlines, which carries the most passengers annually in North America, said it was working with the FAA to minimise customer disruption.

United Airlines said it would waive change fees and any difference in fare for customers rescheduling flights departing on or before 16 January, 2023.

Delta said it was “safely focused on managing our operation during this morning’s FAA ground stop for all carriers”, adding it would provide updates as soon as possible.

For international passengers, Air Canada – the foreign carrier with the most flights into the US – said the outage would impact on cross-border operations on Wednesday, but it couldn’t initially say to what degree. The carrier said it would put in place a “goodwill policy” so affected passengers can change their travel plans.

Virgin Atlantic said it was continuing to operate its schedule of US flights departing from the UK. However, some US departures may be affected by delays.

British Airways said its flights to and from the US were continuing to operate as planned.