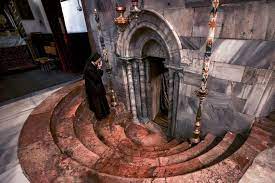 LONDON (Agencies): US officials have repatriated a 2,700-year-old artifact to the Palestinian Authority following a legal investigation into stolen antiquities, the New York Times reported.

The cosmetic spoon was handed over by American representatives to Palestinian officials in the city of Bethlehem on Thursday, marking the first time that a stolen artifact had been repatriated by the US to the PA.

The spoon, produced between 700 and 800 B.C. within the Assyrian Empire, is thought to have been used to pour incense onto fire during religious rituals.

It was part of a large number of objects acquired by US billionaire Michael Steinhardt, who in 2021 surrendered his $70 million collection of antiquities and received a lifetime ban on purchasing artifacts.

The spoon first appeared for auction in 2003 when Steinhardt purchased it from an Israeli dealer who is accused of trading stolen artifacts.

Rula Maayah, Palestinian minister of tourism and antiquities who met with US officials in Bethlehem, said: “This artifact is important as it acquires its real scientific and archaeological value in its authentic location.”

George Noll, chief of the US Office of Palestinian Affairs, said at the handover ceremony that the repatriation was “a historic moment between the American and Palestinian people, and a demonstration of our belief in the power of cultural exchanges in building mutual understanding, respect and partnership.”