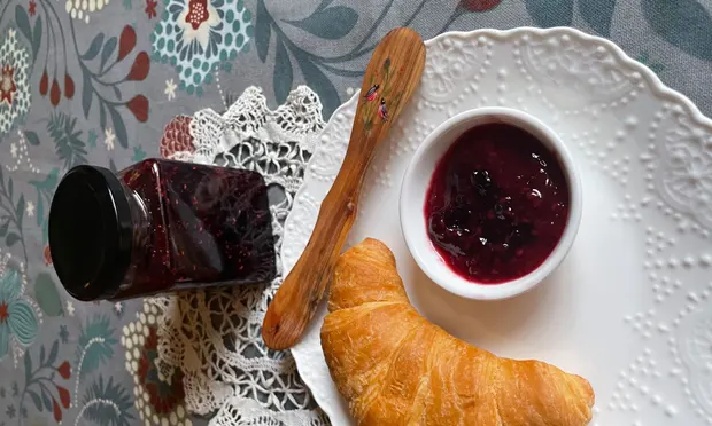 Picture this: it’s the day after a big party – perhaps it was a summer picnic – and among the empty glasses and used plates, slightly soggy crackers and decidedly secondhand-looking wodges of cheese, there’s an assortment of leftover fruit.

Maybe it’s berries or passionfruit that weren’t used on the pavlova, or excess flesh not used in the mango float. More than likely, there’s some sliced lemon that never realised its dream of becoming a garnish. Whatever it is, there’s not really enough of any one thing to do much with, so chances are these odds and sods will either sit on the bench or in containers in the fridge until they’re definitely no good to anyone.

Enter: use it up jam! This recipe allows you to turn bits and bobs of fruit into a delicious preserve that has the potential to last for years in the pantry. It works best with soft summer fruits like cherry, strawberry, blueberry, raspberry, mango, passionfruit, peach, apricot, nectarine and plum.

If you’ve never jammed soft fruit before, don’t stress – it’s really not difficult. Boiled down (forgive the pun), it basically amounts to:

Of course it’s important to make sure you do stuff safely – like sterilising jars – but if you’re ever feeling overwhelmed about trying a traditional-type skill for the first time, just remember that once upon a time, people used to learn said skill with no fancy cookbooks, no TV shows, and definitely no internet.

I’ve given an example of weights, but you can absolutely tailor this recipe to whatever you have. Just be sure to add ¾ (75%) as much sugar as you have fruit, and you’ll be fine (from a food-preservation point of view).

Wash the fruit in warm water, then trim off any manky bits.

Wash lemon, slice in half (if not already in slices), and squeeze juice into the pot, then add the leftover skin and pulp.

Stir until well combined, cover and leave to macerate for a few hours. Macerating is the process of drawing the juices of fruit out using sugar, which turns the sugar into liquid. This allows you to quickly boil jam to a set – meaning the fruit is more likely to stay in pieces rather than turning to mush.

Once the sugar has liquefied, put the pot on the stove and bring it to a rolling boil.

Keep the jam boiling until it sets. A jam or jelly is at setting point when it gels enough to form a wrinkled skin when you push your finger through it. The simplest way to test this is to drip a bit of boiling jam or jelly on a cold plate, letting it cool for five minutes or so, then giving it a poke. If it doesn’t look gelled enough, continue boiling for another five minutes and try again.

Being careful not to burn yourself on the hot, set jam, remove the lemon pieces.

Pour into hot sterilised jars and seal while hot.

Store in a cool dark cupboard, for potentially years before opening, then keep it in the fridge once you’ve cracked the jar.