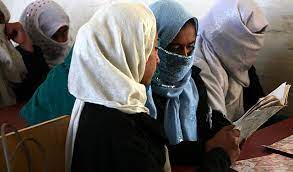 KABUL (Pajhwok): A number of residents of Kabul province say they will leave the country if girl students above grade six are not allowed to return to their classes, but the government says work is underway on a mechanism in this regard.
Girl students above sixth grade have been kept out of schools since the political change in the country one and a half years ago.
In addition to Kabul, the residents of different provinces have since been complaining about the issue and have been urging the new government to reopen girls’ high and secondary schools.
Ahmad Navid, a resident of Kabul, told Pajhwok Afghan News that nearly one and a half years had passed the people were pining for the reopening of girls’ schools but the government remained silent in this regard.
He warned if the government did not reopen girls’ schools, people would be forced to leave the country and migrate to other countries for education of their children.
Navid said: “If the situation continues like this, I will also leave the country and migrate to a neighboring country for the education of my children.”
Another resident of Kabul expressed similar views and said as a father he would want to migrate to another country for the education of his children: “No one wants to have illiterate children in today’s modern world and neither the circumstances allow girls not to study.”
Wasim, another inhabitant of Kabul, held similar views regarding the closure of girls’ schools.
He said: “The government must allow girls to pursue their education before the people are forced to leave the country and migrate.”
Marwa Hashimi, a 12th grade student in Kabul, told Pajhwok that if the government continued to ban girls’ education, it would have consequences for both the families and society.
Najibullah Jameh, a political analyst, told Pajhwok: “The education of girls and the work of women, their participation in social, political, economic and cultural activities are the need of today’s world. Also our religion, culture and history clearly support this.”
He added there was no justification for closing girls’ schools from 7th to 12th grade, but it widening the gap between the government and the nation.
He said this action was alienating Afghanistan and dividing the society besides creating economic problems in the long run and causing national distrust.
Government officials did not respond to Pajhwok about the matter, but the government spokesman Zabihullah Mujahid last month told a meeting in Turkey that in Afghanistan the reopening of schools for all girls was necessary and work was underway to reform the curriculum and create a separate education system for girls.