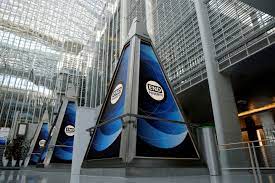 WASHINGTON (Reuters): The World Bank is seeking to vastly expand its lending capacity to address climate change and other global crises and will negotiate with shareholders ahead of April meetings on proposals that include a capital increase and new lending tools, according to an “evolution roadmap” seen by Reuters.

The roadmap document — sent to shareholder governments — marks the start of a negotiation process to alter the bank’s mission and financial resources and shift it away from a country- and project-specific lending model used since its creation at the end of World War Two.

The World Bank management aims to have specific proposals to change its mission, operating model and financial capacity ready for approval by the joint World Bank and International Monetary Fund Development Committee in October, according to the document.

A World Bank spokesman said that the document aimed to provide details on the scope, approach, and timetable for the evolution, with regular updates for shareholders and decisions later in the year.

The development lender will explore options like a potential new capital increase, changes to its capital structure to unlock more lending and new financing tools such as guarantees for private sector loans and other ways to mobilize more private capital, according to the document.

But the World Bank Group is not ready to bow to demands from some non-profit organizations to abandon its longstanding top-tier credit rating to boost lending, stating: “Management will explore all options that increase the capacity of the WBG whilst maintaining the AAA rating of the WBG entities.”

US Treasury Secretary Janet Yellen has called for the World Bank and others to revamp their business models to boost lending and harness private capital to fund investments that more broadly benefit the world, such as helping middle-income countries transition away from coal power.

A US Treasury spokesperson declined comment on the World Bank document.

The bank said proposals under consideration include higher statutory lending limits, lower equity-to-loan requirements and the use of callable capital — money pledged but not paid in by member governments — for lending.

Development experts say this shift would greatly increase the amount of lending compared to the current capital structure, which only utilizes paid-in capital.

“The challenges the world is facing call for a massive step up in the international community’s support,” the bank said in the document. “For the WBG to continue to play a central role in development and climate finance, it will need a concerted effort by both shareholders and management to step up WBG financing capacity.”

The roadmap document cautions that a build-up of lending for climate change, health care, food security and other needs may require a capital increase to boost the capacity of the World Bank’s middle-income lending arm, the International Bank for Reconstruction and Development.

IBRD’s $13 billion capital increase in 2018 “was designed to be prepared for one mid-sized crisis a decade, and not multiple, overlapping crises” including the COVID-19 pandemic, the war in Ukraine and the effects of accelerating climate change, the document said. IBRD’s crisis buffers will likely be depleted by mid-2023, it said.

Another option, according to the roadmap, is for World Bank shareholder countries to step up periodic contributions to the lender’s fund for the world’s poorest countries, the International Development Association, which have declined in recent years despite increasing needs.

The roadmap also offers the option of creating a new concessional lending trust fund for middle-income countries that would focus on global public goods and be similar in structure to IDA, with regular funding replenishments that would be separate from the bank’s capital structure.

“Such a fund may attract donor bilateral resources separate from shareholder budget lines supporting the WBG, and potentially include donors beyond shareholders,” such as private foundations, the bank said.

The bank said that the evolution of its mission to increase climate lending while maintaining good development outcomes will require additional staff and budget resources, which have declined 3 percent in real terms over the past 15 years.