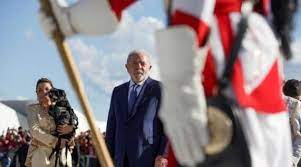 Lula’s decision to extend the fuel tax exemption, which will deprive the Treasury of 52.9 billion reais ($9.9 billion) a year in fiscal income, was a stinging rebuke of his finance minister Fernando Haddad, a Workers Party (PT) loyalist who had said it would not be extended.

Haddad, seeking to dispel market fears that he might not maintain fiscal discipline, took office on Monday, pledging to control spending. “We are not here for adventures,” he said.

In speeches delivered at his inauguration in Brasilia on Sunday, Lula promised that tackling hunger and poverty would be “the hallmark” of his third presidency after two previous stints running the country from 2003 to 2010.

Financial analysts said the start of Lula’s third presidency was in line with his campaign promises and looked similar to earlier Workers Party policies that led to a deep recession.

On Monday, Lula instructed ministers to revoke steps to privatise state companies taken by the previous administration, including studies to sell Petrobras, the Post Office, and state broadcasting company EBC.

On Sunday, he signed a decree extending an exemption for fuels from federal taxes, a measure passed by his predecessor to lower their cost in the run-up to the election, but which will deprive the Treasury of 52.9 billion reais ($9.9 billion) a year in fiscal income.

The federal tax exemption for fuels will last one year for diesel and biodiesel and two months for gasoline and ethanol, a decree published in the official gazette showed on Monday.

“The policies remind us of Dilma Rousseff’s government rather than Lula’s,” Gracia said, referring to Lula’s handpicked successor, who was impeached while in office. “Her policies led to Brazil’s worst recession since 1929.”

Lula, who lifted millions of Brazilians from poverty during his first two terms, criticised Bolsonaro for allowing hunger to return to Brazil. He wept during his speech to supporters on Sunday as he described how poverty had increased again.

Lula kicks off his third presidential term after persuading Congress to pass a one-year, 170 billion-reais increased social spending package, in line with his campaign promises.

“The package ended up being bigger than expected, with potential repercussions for public debt sustainability,” Banco BTG Pactual said in a research note.

Lula spent his first day in the office meeting with more than a dozen heads of state who attended his inauguration.

The meetings started with the king of Spain. They continued with South American presidents, among them the leftist leaders of Argentina, Chile, and Bolivia, representatives from Cuba and Venezuela, and Vice President Wang Qishan of China.

On Twitter, Lula said he had received a letter from Chinese leader Xi Jinping expressing a desire to increase cooperation between the two countries.

“China is our biggest trading partner, and we can further expand relations between our countries,” Lula added.

The new president is also set to attend the wake of Brazilian soccer star Pele, who died on Thursday at 82 after battling colon cancer.

Lula will pay his respects and tribute to Pele and his family on Tuesday morning, the president’s office said in a statement.