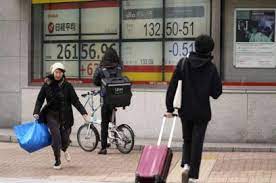 HONG KONG (AFP): Most Asian markets bounced from early losses and the yen hit a seven-month high Tuesday to start the year on a positive note, but ongoing worries about interest rates, China’s growth and the Ukraine war continue to dampen the mood.

While 2022 was painful for investors, there is a fear that the next 12 months could be worse, with the head of the International Monetary Fund warning a third of the global economy could slip into recession.

Eyes are on China, where the swift removal of most zero-Covid measures has sparked a massive surge in infections that has filled up hospitals and left crematoriums overloaded.

The widespread outbreak has fanned fresh concerns for the economic outlook as businesses are being forced to shut down, after having already been battered by the strict containment measures put in place for almost three years.

Analysts said infections may have already peaked in major cities including Beijing, where activity is picking back up.
But there are fears that an expected spike in travel over the Lunar New Year holiday at the end of the month could see cases spread to the countryside and further impact the economy.

“With the ongoing Covid tidal wave, investment sliding to a 10-quarter low, and new orders continuing to get battered, a meaningful first-

And IMF chief Kristalina Georgieva said with China’s economy looking shaky just as the United States and European Union edge towards contraction, the outlook for the world was downbeat for 2023.

She told CBS’s “Face the Nation” that this year will be “tougher than the year we leave behind”.

While the United States may avoid it, she warned half the 27-nation European Union will be in recession, as the bloc is “very severely hit” by the Ukraine conflict. China’s economy will likely be at or below global growth for the first time in 40 years, she added.

However, after a negative start to the day, Asia markets turned brighter as it progressed.

Hong Kong was lifted two percent by hopes for the city’s economy ahead of an expected January 8 reopening of the border with China. Macau-based casino shares led the rally as investors bet on a recovery in revenues, with MGM China up 14 percent and Wynn Macau soaring eight percent.

The Hang Seng Index’s rise came after it suffered its worst year since 2011.

There were also gains in Shanghai, Taipei, Manila, Mumbai and Jakarta, though Sydney, Seoul and Singapore remained in the red.
Investors are now bracing for another series of central bank rate hikes in the early months of the year as monetary policymakers battle to rein in decades-high inflation.

The sharp increase in borrowing costs last year was a key reason for the major pain suffered by equity markets as traders contemplated the end of years of cheap cash.

The Fed and others have suggested they will slow their pace of increases, but they are tipped to take rates higher than previously expected and not start to cut until later in the year or even 2024.

Friday’s release of US jobs data will be closely followed for an idea of how the Fed will move next, with a strong reading likely to put pressure on the bank to keep lifting for some time.

Still, the yen extended its gains to briefly hit 129.52 per dollar — its highest level since June — after the Bank of Japan shifted away from its long-standing ultra-loose monetary policy.

The BoJ said last month it would loosen its grip on yields and allow those on certain government bonds to move in a wider band.
Observers see the unit pushing much higher, after it hit a three-decade low close to 152 per dollar as recently as October.

“The yen’s current level is significantly undervalued, even after the recent rally,” Rajeev De Mello, at GAMA Asset Management, said. “I would expect an end to (the Bank of Japan’s) negative rates by April. This further removes obstacles for the yen to strengthen more.”