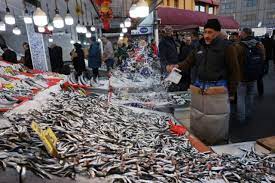 Consumer prices rose by 64.3 percent in December from the same time last year, the state statistics agency said, compared to an 84.4-percent increase in November.

The latest reading is still higher than in any other emerging market except for Argentina.
But it fulfils Erdogan’s campaign promise that inflation will start falling at the start of the year after reaching the highest levels since 1998 last year.

Erdogan hailed the data as a sign of a “rapid recovery”. “We will see that the downward trend in inflation will continue,” he said in a televised address.

“Our goal this year is to completely burst the bubble of inflation and remove the issue from our country’s agenda as of next year.”
Turkey’s economy has been going through convulsions since Erdogan launched an unusual experiment in September 2021 that tried to fight inflation by bringing down borrowing costs.

The lira began to lose value almost immediately, as consumers rushed to buy up gold and dollars to protect their savings.
The price of imports such as oil and gas soared, creating an inflationary spiral that the nominally independent central bank fed further by continuing to lower interest rates.

The annual inflation rate peaked at 85.5 percent in October 2021.

But polls show that most Turks lost trust in the official data when Erdogan replaced the head of the state statistics agency in the wake of a particularly dire inflation report last year.

A separate study released by Turkey’s ENAG research institute showed the rate slowing to 137.6 percent in December from 170.7 a month earlier.

The crisis forced Erdogan to alter his foreign policy, resuming economic alliances with petrodollar-rich rivals in the Arab world and ramping up trade with Russia, despite its war on Ukraine.

These deals have helped to prop up Turkey’s hard currency reserves, allowing it to stabilise the lira. The government has additionally forced exporters to convert 40 percent of their dollar revenues into liras, further supporting the Turkish currency.

The lira’s stabilisation has helped temper the pace of price increases.

But analysts warn that a wave of populist social support measures that Erdogan announced heading into the election make the current economic policies unsustainable.

He has tripled the minimum wage in the past year, raised state salaries and hiked pensions for millions of Turks.

He announced a new 25-percent hike in pensions and civil servant salaries on Tuesday.

Analysts believe these policies will cost the state billions of dollars, draining the budget and fuelling inflation.

Erdogan has vowed not to raise the benchmark interest rate, which at nine percent is just a fraction of the annual inflation rate.