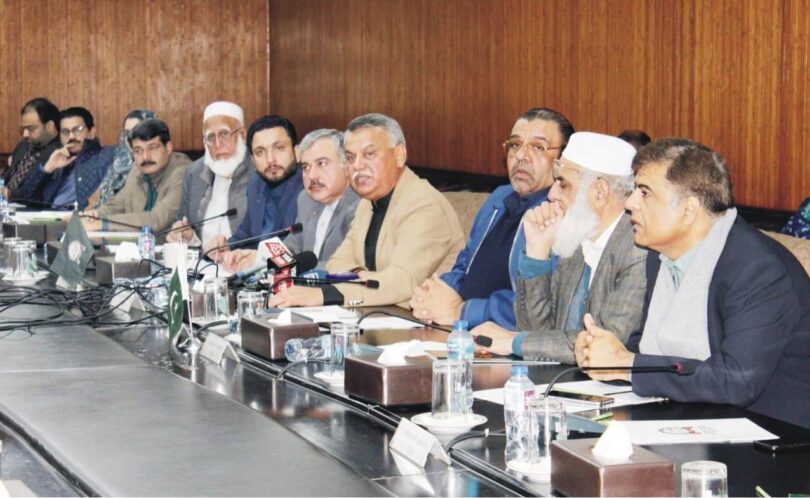 PESHAWAR: Businessmen in Khyber Pakhtunkhwa blamed the present coalition government in centre for current economic turmoil and criticizing for adopting anti-business and industry policies and contradictions in statistics which are beyond the ground realities, calling it as economic-terrorism for KP and rest of part the country.

Speaking at a news conference, President Sarhad Chamber of Commerce and Industry (SCCI) Muhammad Ishaq along with traders and industrialists said business and industrial growth has slowed down over the past eight months owing to enforcement of business-hostile policies.

Ishaq noted the situation is getting from bad to worse with each passing day. He added the national economy has brought a brink of a complete collapse.

The SCCI chief asked if the government wants to put the economy on the right track, so it should revisit its policies and make consultation with the business community, otherwise, the inconsistent policies were not in the best interest of the economy and the country.
Ishaq gave an elaborated statistical and critical analysis about provision of electricity to businesses and industries, saying that the government has started imposition of heavy tariffs.

He added that charges on the name of quarter tariff adjustment, fuel adjustment price were being collected the billionsof rupees from industries now have been imposed fixed charges.

The SCCI president maintained industries were working on capacity of 10 t0 15 per cent, in such a situation imposing huge power tariff is completely unjust and unfair. He said the irony is that 3.1million was recovered in the name of fixed charges in power bills from closed industrial units in the last one month. He said it is completely unfair and unjust to attach a business community with circular debts. He demanded the re-introduction of maximum demand indicators policy by abolishing fixed charges.

Ishaq while expressing serious reservations over ban on opening of Letter of Credits (LCs) for the last four months said that more than 100,000 LCs have so far blocked, in which 1800 containers of a private company had been stuck up in Karachi port, on which 200 dollars per containers collected as demurrage charges on daily basis.

The chamber president said the government, Minister for Commerce and state bank of Pakistan is answerable for this whole scenario as 10.8billion dollars imported consignments had so far stuck up at Karachi port. He said the situation has become so bad that a trader cannot import even 1500 to 1600 dollars of raw materials.

On the other hand, he said dollar scarcity was also creating great difficulties for the business community. He called the circular of the State Bank of Pakistan a mere joke with the business community. He expressed apprehensions that the industries may close down in the coming days if the current situation would continue to prevail in the country.

Regarding the increasing lawlessness in Khyber Pakhtunkhwa, Ishaq said the current state of security situation was creating great unrest among the business community as traders are continuously receiving extortion calls and threats from foreign SIMs.

He said the trade volume had dropped by 800million dollars which stood at 2.5 billion dollars a few years back whereas trade with five central Asian republics is around 75billion dollars in which Pakistan’s share is around 465million dollars. He said huge potential existed in CARs market but Pakistan didn’t reap its benefit efficiently.

Talking about export from Afghanistan to re-export of China, Mr Hussain said restrictions have been imposed which has created difficulties for KP traders to carry out trade with China, urging that government to carry out a balanced approach while doing trade, friendship, relationships, business and politics with China.

Ishaq, on the occasion expressed dissatisfaction over the performance of Pakhtunkhwa Energy Development Organization (PEDO), calling it as a white-elephant, demanding to completely abolish the PEDO or change the current management of the institute.

The SCCI chief strongly opposed the ban on plastic bags, saying that no such restriction was imposed in Punjab and Quetta, which is reflecting the double standard policy of the incumbent government. He urged the government to review its decision to save investment of billions of rupees in the plastic manufacturing sector.

Ghazanfar Bilour, Chief Minister Focal Person on Ease of Doing Business and Investment also spoke on the occasion and flayed the anti-trade and industries policies of incumbent coalition government. He said the government and its cabinet members had given examples of foreign countries, but I have asked from them, the facilities were provided to investors in Pakistan, which are available to businessmen in the rest of the world.

Bilour also lamented that KP and Balochsitan didn’t invite a meeting on war on terrorism, which is the most affected by this menace of terorism.