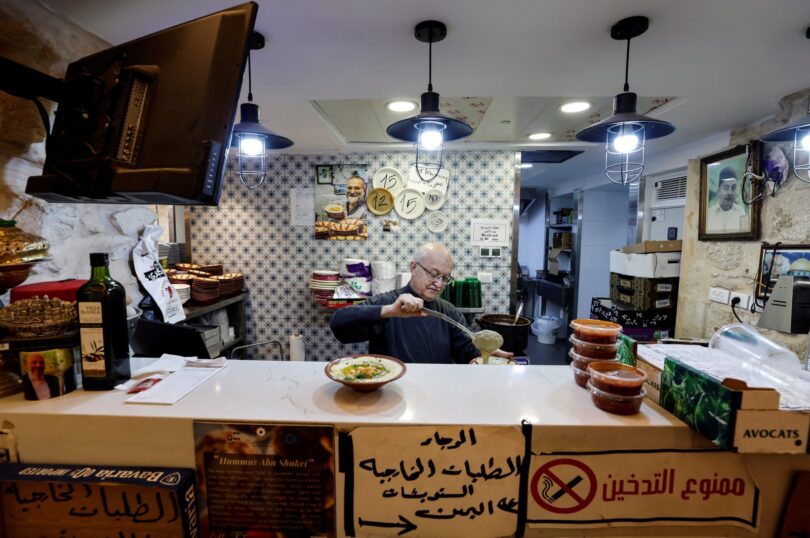 Bukhari, descended from Sufi mystics who walked to Jerusalem from Bukhara in Uzbekistan 400 years ago, takes guests down the narrow streets of the Old City, to food stalls and restaurants, telling stories of recipes dating back thousands of years.

For Palestinians living in the complex and often tense political environment of East Jerusalem, which includes the walled Old City and its three major holy sites, food is a major part of their cultural identity. The stories behind it open up ways to talk about the wider culture.

Bukhari explains that “Kras Beid”, a quiche-like dish but with a pizza-style crust, is not just cuisine but also a social activity that brings people together in the evenings. Even the humble plate of hummus served for breakfast has found itself at the center of heated debates on whether it is a Jewish or Palestinian dish.

“It gives me a way to talk about Palestine and the culture of Palestine through the food,” says Bukhari.

The overwhelming majority of East Jerusalem’s more than 340,000 Palestinians hold Israeli residency permits but few have citizenship in Israel, which considers the entire holy city as its eternal, undivided capital.

Palestinians have long sought the city’s east, which Israel captured during the 1967 war and later annexed in a move not recognized internationally, as the capital of a future state.

Friction between Israel and Palestinians can sporadically arise, especially around the Al-Aqsa mosque, one of the Middle East’s most volatile holy sites.

A lesson on food becomes a lesson about a city that has changed hands, like recipes, over generations. In a spice shop, Bukhari explains that rice was once considered a rare delicacy and used sparsely or as a garnish served on other grains; while Palestinians mostly cook with other grains, such as Freekeh, wheat picked when it is young and then fire-roasted.

“In our area politics is a big part of the talk of the day, so to have something different which focuses on culture, I found it to be unique and people enjoy it as well,” remarked Bukhari.