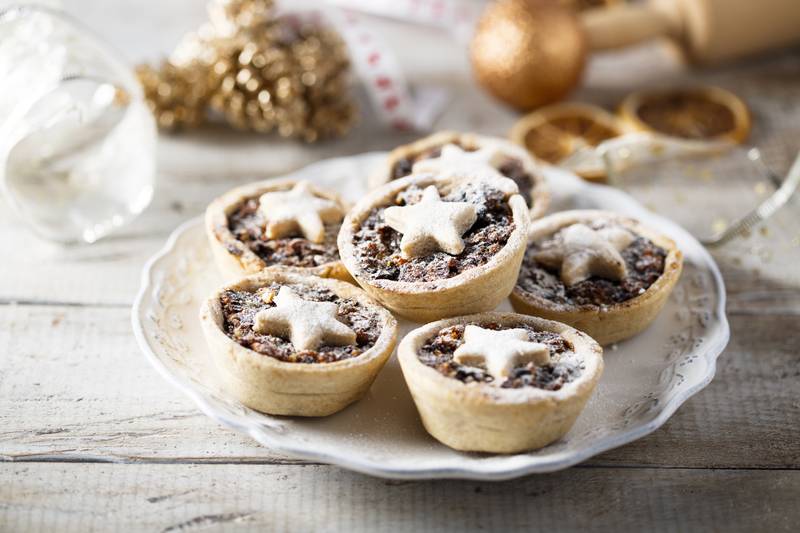 There’s no denying that some foods are inherently Christmas-sy.

The likes of turkey, candy canes and gingerbread, while available all year round, are so associated with the festive period, you can’t help but think of the festival when you eat them.

Each dish on the Christmas dinner table is the result of centuries of tradition and evolution, with recipes created from ingredients that traversed the globe, and foods that defied political attempts to ban them.

Here are some classic Christmas foods and dishes, and the stories and traditions behind them.

The style of cooking that combined meats with fruits and spices was transported to Europe from the Middle East through the 11th to 13th centuries.

Pies that melded savoury and sweet ingredients became popular in England around that time, although some food historians argue the practice dated back to Roman times when sweetmeats were eaten during the December festival of Saturnalia.

During Tudor times, the pies were called “shrid pies” owing to the shredded meat, while the term “minched pies” came about in the Elizabethan era.

By the 16th century, they had been renamed “Christmas pies” and Puritans sought to ban them citing Christmas’s association with Catholicism.

Turkey and Christmas go together like Easter and chocolate eggs, but it wasn’t always the bird of choice for the festive table.

In the UK, the meat centrepiece used to be anything from goose and beef to boar and chicken, with the wealthy opting for swan or peacock.

It was Henry VIII who began the turkey tradition in Britain. The bird was brought to Britain in 1526, most likely from Turkey via Spain, and farmers quickly realised that eating the imported bird meant they wouldn’t have to cull from their own livestock.

The birds were reared in Norfolk, Suffolk and Lincolnshire and the king tried a Norfolk Black bird for his Christmas meal. By the 17th-century, the turkey’s position as the Christmas bird was widespread.

The ingredients that create the traditional gingerbread taste arrived in Europe from the Middle East during the 11th century.

The spices, sugars, almonds and citrus fruits were combined in all manner of ways to create different styles and shapes of cakes and biscuits in different countries.

Gingerbread was a popular food sold at medieval festivals and fairs, where they were given as a sign of affection to children and loved ones, with Torun in Poland famous for the recipe since the 13th century.

Gingerbread men in particular were first served at the court of Queen Elizabeth I (who reigned from 1558 to 1603) where the figure-shaped biscuits would be served to visiting dignitaries.

They became more widespread as the ingredients became cheaper and more accessible, becoming a festive favourite as tree ornaments and gingerbread houses.

While the heavy festive fruit bread is German in origin, having stollen at Christmas is a tradition that has spread across the world.

Weihnachtsstollen (Weihnachten is German for Christmas) was originally made with only flour, oats and water, and was first baked as a Christmas bread at the Council of Trent in 1545 with the additions of yeast and oil. Ingredients such as nuts, spices, dried fruit and marzipan were added over the centuries to sweeten it.

As the season of Advent was a time of fasting, bakers were not allowed to use butter in their stollen. Prince Ernst and his brother Duke Albrecht of medieval Saxony wrote to Pope Nicholas V in 1450 to request leniency in the rule, but were denied. Finally, in 1490, Pope Innocent VIII wrote the “Butter-Letter” to the prince, allowing the use of butter for the prince-elector, his family and household.

Legend has it that candy canes as we know them today originated in Germany in 1670.

According to folklore, the choirmaster at Cologne Cathedral needed a way to keep the children of the congregation quiet during the Christmas Eve service. He sought the services of a local sweet maker to create sugar sticks to keep the little ones occupied, but had them bent into the shape of shepherd’s crook to turn them into a teachable moment about Jesus.

Originally pure white in colour, the reds and greens we know today, as well as the peppermint flavour, were added centuries later in the 1800s.

Meaning “large cake”, this soft Italian offering, which originated in Milan, is a popular sight on Christmas tables the world over. Panettone has its roots in the Roman Empire when it was a leavened cake sweetened with honey.

Its association with the festive season stems from the fact in the expenses register of the Borromeo college of Pavia, Lombardy, in 1599, it stated that on December 23, 2.3kg of butter, about 1kg of raisins and 85gm of spices were to be given to the baker to make 13 “loaves” to be given to college students on Christmas Day for lunch.

Also known as plum pudding (although plum refers to raisins) this festive staple has its roots in medieval England, and was made from dried fruit, suet, breadcrumbs, flour, eggs and spice.

The modern Christmas pudding was first documented in the 17th century, with food historians pointing to a recipe in Mary Kettilby’s 1714 book A Collection of Above Three Hundred Receipts in Cookery, Physick and Surgery.

It wasn’t until the Victorian era (1837–1901) that the pudding became associated with Christmas, with Eliza Acton referring to it as “Christmas Pudding” in her 1845 book Modern Cookery for Private Families.

The sprig of holly placed on top represents everlasting life through the winter.

The sweet festive favourite is called the buche de Noel in France, where it originated.

Benelux countries Belgium and Luxembourg, as well as Switzerland, Canada, Vietnam and Lebanon all have their own variations.

Traditionally, the yule log was just that, a large log cut from a tree and burnt in the home over the 12 days of Christmas to mark the new sun.

As modern cooking shifted from the fireplace to the hob, smaller logs were placed in the middle of the dinner table as representation, which inspired the modern chocolate version, complete with bark markings.