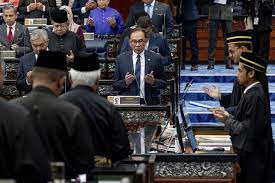 The vote, called by Anwar’s government at the start of a two-day special parliamentary session, was a show of strength intended to remove doubts over his authority to govern and the stability of his administration. Leaders of parties in his government agreed on Friday on a cooperation pact for a five-year term, giving him the backing of 148 lawmakers, a two-thirds majority that no leader has had since 2008.

The motion was passed through a simple voice vote after a debate by lawmakers.

The opposition earlier slammed a clause in the government’s cooperation pact that put lawmakers at risk of losing their seats if they failed to toe the line, calling it unconstitutional and oppressive. Government lawmakers defended the move as necessary to ensure the government won’t be put in jeopardy by the action of individual lawmakers. Malaysia has been rocked by political instability since 2018 polls with a series of three prime ministers before Anwar took over due to party infighting and defections.

The strong mandate will help Anwar navigate an expected economic slowdown next year, but he faces stiff challenges in uniting a polarized nation. Many ethnic Malays, who comprise two-thirds of Malaysia’s 33 million people, opted for Muhyiddin’s right-wing bloc in the contentious election. Muhyiddin’s hard-line ally, the Pan-Malaysian Islamic Party that supports Shariah law, unexpectedly took 49 seats to become the country’s single largest party in an indication of the rise of conservative Islam.

The election outcome saw political wrangling and sparked uncertainties for days. The nation’s king initially proposed a unity government between Anwar and Muhyiddin’s bloc but it was rejected by Muhyiddin, who claimed he had a simple majority to rule. But the monarch later declared he was satisfied that Anwar was the candidate likely to have majority support.

Parliament earlier Monday observed a minute of silence for the victims of a deadly landslide in central Selangor state. At least 24 people, including seven children, died with nine others still missing after Friday’s landslide hit an unlicensed campground.