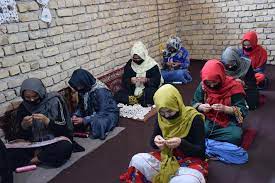 KABUL (TOLOnews): The European Civil Protection and Humanitarian Aid Operations in a report expressed concerns over the humanitarian situation in Afghanistan, saying that half of the population remains dependent on humanitarian aid, including 6 million living on the edge of famine.
According to the report, the debt has racked up as food prices have been rising and that the drought, warming temperatures and lack of money to buy seeds and agriculture tools put another harvest in jeopardy.
“Having struggled through a year of unprecedented economic hardship and environmental disasters, including earthquakes and flooding, families have little left to get through this winter,” the report reads.
Speaking at a press conference at the UN, Pakistan Foreign Minister Bilawal Bhutto Zardari said that it was important to support the functioning of Afghanistan’s economy. Zardari cited economic challenges as the reason for early marriages in Afghanistan.
“When the economic times are tough… I don’t believe that with the Afghan money frozen, with the banking channels shut, we would see progress on this and other issues,” Zardari said in response to a question by Al-Jazeera.
The Ministry of Economy (MoE) said that there is a need for infrastructure projects to provide job opportunities for the citizens.
“In addition to humanitarian aid, the development aid is continuing. Second, launching major projects that can create jobs, and third is supporting small and micro industries, which can alleviate economic challenges,” said Abdul Latif Nazari, deputy minister of Economy.
Economists gave various opinions in this regard.
“The aid of the international community has not been able to reduce the level of poverty and solve the economic challenges due to lack of transparency and a general mechanism in Afghanistan,” said Seyar Qureshi, an economist.
“The Afghan government needs to engage with the world to attract humanitarian aid, and with aid that can be invested in infrastructure as well as in development projects,” said Darya Khan Baheer, an economist.
Earlier, the International Organization of Migration (IOM) said that 97 percent of the population is living below the poverty line in the country.