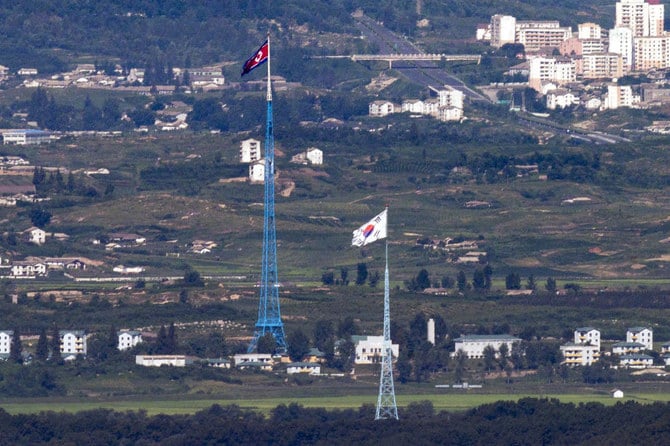 SEOUL (AP): North Korea test-fired a pair of ballistic missiles with a potential range of striking Japan on Sunday, in a possible protest of Tokyo’s adoption of a new security strategy to push for more offensive footing against North Korea and China.

The launches came two days after the North claimed to have performed a key test needed to build a more mobile, powerful intercontinental ballistic missile designed to strike the U.S. mainland.

The two missiles traveled from the country’s northwest Tongchangri area about 500 kilometers (310 miles) at a maximum altitude of 550 kilometers (340 miles) before landing in the waters between the Korean Peninsula and Japan, according to the South Korean and Japanese governments.

South Korea’s military described both missiles as medium-range weapons that were launched at a steep angle, suggesting they could have traveled farther if fired at a standard trajectory. North Korea usually tests medium- and longer-range missiles at a high angle to avoid neighboring countries, though it fired an intermediate-range missile over Japan in October, forcing Tokyo to issue evacuation alerts and halt trains.

In an emergency meeting, top South Korean security officials deplored North Korea’s continued provocations that they said came despite “the plight of its citizens moaning in hunger and cold due to a serious food shortage.” They said South Korea will boost a trilateral security cooperation with the U.S. and Japan, according to South Korea’s presidential office.

Japanese Vice Defense Minister Toshiro Ino separately criticized North Korea for threatening the safety of Japan, the region and the international community. The U.S. Indo-Pacific Command said the launches highlight the destabilizing impact of North Korea’s unlawful weapons of mass destruction and ballistic missile programs. It said the U.S. commitments to the defense of South Korea and Japan “remain ironclad.”

Kwon Yong Soo, a former professor at Korea National Defense University in South Korea, said North Korea likely tested its Pukguksong-2 missile, a solid-fueled, land-based variant of its Pukguksong family of missiles that can be fired from submarines. Kwon said that flight details of the weapons tested Sunday were similar to those of the Pukguksong-2’s two known tests in 2017.

Kwon said the Pukguksong-2 can fly about 1,200-2,000 kilometers (745-1,240 miles) if it’s launched at a normal trajectory, a range enough to strike key facilities in Japan, including U.S. military installations there. Some experts say the Pukguksong-2 is nuclear-capable.

“North Korea staged an armed protest with a land version of a submarine-launched ballistic missile that it can fire quickly in response” to the Japanese national security strategy, Kwon said.

Some observers say North Korea might have tested a newly developed medium-range missile that can still reach Japan.

On Friday, the Japanese government adopted a national security strategy that would allow it to carry out preemptive strikes and fire powerful cruise missiles to give itself more offensive footing against threats from neighboring China and North Korea. That was a major break from its strictly self-defense-only postwar principle. The Japanese strategy names China as “the biggest strategic challenge” — before North Korea and Russia — to Japan’s efforts to ensure peace, safety and stability for itself and the international community.

Sunday’s launch is the North’s first public weapons test since it launched last month its developmental, longest-range liquid-fueled Hwasong-17 ICBM capable of reaching the entire U.S. homeland. Earlier this year, North Korea test-launched a variety of other missiles at a record pace.

North Korea has defended its weapons testing as self-defense measures to cope with the expanded U.S.-South Korea military drills that it views as an invasion rehearsal. But some experts say North Korea likely used its rivals’ military training as an excuse to enlarge its arsenal and increase leverage in future negotiations with the U.S. to win sanctions relief and other concessions.

“In the face of mounting diplomatic pressure after an unprecedented year for North Korean missile tests, the Kim regime is determined to show no weakness ahead of its New Year’s political events,” said Leif-Eric Easley, a professor at Ewha University in Seoul.

On Friday, North Korea said it tested a “high-thrust solid-fuel motor” for a new strategic weapon the previous day, a development that experts say could allow it to possess a more mobile, harder-to-detect arsenal of intercontinental ballistic missiles that can reach the U.S. mainland.

North Korea will likely use the motor to build a solid-fueled ICBM, which is among a list of high-tech weapons systems that leader Kim Jong Un has vowed to build to deal with what he calls U.S. hostility, experts say.

All of North Korea’s existing ICBMs use liquid propellant, which must be added to the weapons before they’re fired. This makes it relatively easier for outsiders to spot their launch preparations via satellites. But fuel in solid-propellant rockets is already loaded inside, so it shortens launch preparation times, increases their mobility and makes it harder for outsiders to learn what’s happening ahead of liftoff. North Korea already has a growing arsenal of short-range, solid-fueled ballistic missiles targeting key locations in South Korea, including U.S. military bases there.

Kwon, the former professor, said North Korea could test-fire a solid-fueled ICBM designed to reach the U.S. West Coast as early as the first half of next year.

Some experts speculate North Korea already has functioning nuclear-tipped missiles that can hit the entire U.S. and its allies South Korea and Japan, given the number of years it has spent on its nuclear program. But others say the country is still years away from acquiring such weapons, noting it has yet to publicly prove it has a technology to build warheads small enough to be placed on missiles or protect warheads from the harsh conditions of atmospheric reentry.