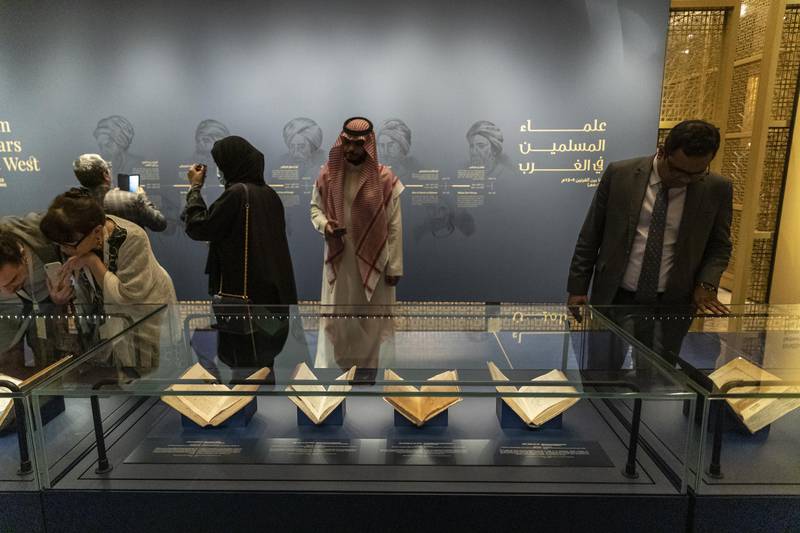 The current exhibition at Qasr Al Watan’s House of Knowledge showcases the remarkable influence cultural and scientific knowledge from the Islamic world has had on Europe and beyond.

Pearls of Wisdom takes visitors on a historical journey inviting them to take a close look at the presence of Arab culture for nearly 800 years in Europe, through valuable and rare manuscripts in the fields of literature, heritage, religion, music, philosophy and science.

Pearls of Wisdom, a collaboration between the Department of Culture and Tourism — Abu Dhabi, the Italian Cultural Institute and the Spanish embassy, showcases 30 manuscripts from the collections of four libraries: the National Library of Marciana, University Library of Bologna, National Library of Spain and Royal Library of El Escorial.

“The exhibition takes the visitor on a journey to the past, during the golden age of Islamic civilization,” Doaa Nounou, curator at DCT Abu Dhabi, tells The National.

“During this era, Al-Andalus and Sicily were the bridge between the Arab world and Europe, where a flow of remarkable culture and scientific knowledge passed through. These regions became focal points for cultural and technological enrichment in the heart of medieval Europe contributing to the development of European Renaissance.”

The manuscripts and beautifully illustrated information throughout show how the intercultural dialogue between the Arab world, Europe, Africa and the three Abrahamic religions were paramount in generating fruitful religious dialogue and contributing to the ushering of a new age in Europe.

Five spaces in the exhibition focus on different areas of knowledge and contribution from the Arab world.

The introductory space gives a brief history of the beginnings of the Arab Islamic civilisation in southern Europe in the 8 and 9th centuries, detailed through a timeline beginning with the Islamic conquests of the Iberian Peninsula in 711 and ending with the Christian conquest of the emirate of Granada in 1481.

The second space spotlights the influence of Arabic language on European culture, with seven stunning manuscripts relating to Arabic linguistics and grammar. It includes a manuscript titled Kitab al-sihah fil-lugha, The Book of Correct Language, the second volume of a dictionary of Arabic language.

The third space details the spiritual and philosophical influences through the co-existence of the three Abrahamic religions, leading to a rise of interfaith dialogue and cultural understanding.

The manuscripts here include a copy of the Quran transcribed in Egypt, a collection of maxims and teachings of the Coptic Bishop Anba Mikhail in Arabic and a manuscript titled Al-Anwar wa muftah al-suroor wal-a’fkar, The Book of Lights, written in 1500 and filled with stories about the Prophet Mohammed written in the Aljamiado script, which is Castilian Spanish written using Arabic script.

The fourth space is dedicated to the art of poetry and music, its influence on cultural life and how it spread in the Andalus region. One of the manuscripts on display includes a copy of Al-badie’ fi wasf al-rabie’, Description of Spring, which contains 240 poems, composed of 1,420 verses.

The fifth space is for translations and contributions in the fields of science. Visitors can see a timeline of how and what Muslim scholars contributed to the West in the scientific field from the 9th to the 14th century. They can also learn about these contributions through 10 manuscripts that detail knowledge in the fields of medicine, zoology, botany, geography and astronomy.

The manuscripts showcased in Pearls of Wisdom offer a rare chance to learn and read about their powerful history.

It offers a more thorough understanding of how the contribution of Arab and Islamic culture influenced Europe, the greater west and humanity.