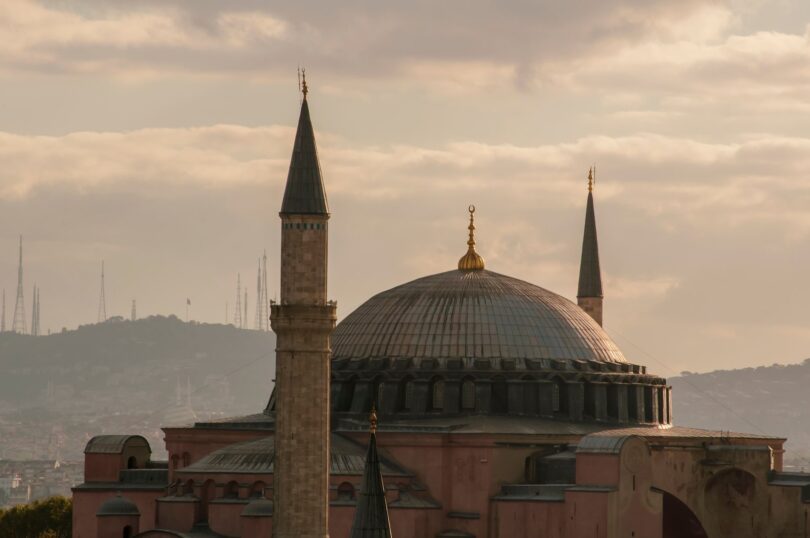 ISTANBUL : Once a church, later a mosque, the Hagia Sophia still has religious significance, extraordinary characteristics and many mysteries, standing the test against time in the heart of Istanbul for centuries

Reverted from a museum back into a mosque, the Hagia Sophia in Türkiye with its history dating back 1,500 years reveals a new mystery every day. Similarities have been found between drawings carved into marble slabs at the historic site and Viking symbols, revealing traces of a group of Scandinavian seafaring warriors.

Selçuk Eracun, a researcher, writer and professional guide of cultural heritage sites such as Hagia Sophia for many years spoke to Daily Sabah regarding the matter. After discovering the sentence “Halfdan was here,” which is thought to have been written by a Viking commander, this particular group became the subject of research and curiosity for the Hagia Sophia.

The Hagia Sophia belongs to the world’s cultural heritage as a universal structure. It appeals to anyone with an interest in Islam, Christianity, history and art. The secrets of the Hagia Sophia, where the histories of many religions, cultures and civilizations are blended, are becoming more evident day by day.

“The history of the quarter-century is in my memory,” Eracun said.

Elaborating on the symbols, Eracun said: “During my work in the Hagia Sophia, I deciphered that the inscription here actually belonged to a Viking ship and soldiers. There was an image of deliberate or unconscious damage on the marble, but once I realized that it was a ship, I could easily decipher the rest. It turned out that the 1-meter-long (3.2-foot-long) inscription may actually belong to people of Scandinavian origin, who came to Istanbul between the ninth and 11th centuries and left their mark on Istanbul in the golden age of the Vikings. This explanation that I put forward was accepted with great enthusiasm and curiosity.”

By comparing the symbols with Viking descriptions, Eracun aimed to improve the quality of the symbol by visualizing the elements with drawings. On the other hand, another discovery was also made: the symbol of a dragon-headed Viking ship.

“Belarusians are Viking in origin. And it’s very interesting that they chose Christianity as their religion. In addition to the inscription, there was a Viking ship that caught our attention among the drawings inside the Hagia Sophia. There are also shields engraved on the ship. It gives us the possibility that this is purely a symbol of Vikings, made by themselves,” he emphasized.

Apart from Viking symbols, one of the mysteries of the Hagia Sophia is the talismans engraved on its columns and marble. Both Christians and Muslims engraved these talismans on the Hagia Sophia in order to protect the shrine from floods, earthquakes and possible invasions. However, the meanings of the talismanic symbols and inscriptions are still completely mystifying for those who visit.

“There are some talismans that we are testing. For example, there is one that was drawn to benefit from its protection against earthquakes. We think that those who did this are Muslims, some signs were engraved there for protection in good faith and tried to protect the Hagia Sophia, at the end of the day, all of them were engraved with good intentions,” he elaborated.

“But apart from that, there were repurposed materials used in Hagia Sophia while it was being built. For example, inside the Hagia Sophia, we can see 16 dolphin motifs on the marble plates on the upper floor and Poseidon’s pitchfork in the middle. It is not appropriate for dolphins and the mythological god Poseidon to be in a church like the Hagia Sophia. Because it was built as a Christian temple. It seems that Christians could not easily get rid of their past habits, this gave them spiritual confidence,” he added.

The Hagia Sophia has been the subject of stories and films, not only due to the visuals it provides but also for its mysterious historical past based on many rumors. It has created a gateway between traditions and beliefs, religions and cultures and the beliefs of both Christians and Muslims on this issue are still valid today.

“The middle door on the qibla side is the largest of all. Its plates are said to be from the wreckage of Noah’s Ark on Mount Ararat, which is considered holy. At the same time, the hole in one of the columns has been the subject of different narrations for both Muslims and Christians. According to the belief of Muslims, Prophet Khidr put his finger into that hole and turned the church in the direction of the qibla, the direction toward the Kaaba in the Sacred Mosque in Mecca. Yet, according to the Christian faith, the narration is very different,” he elaborated.

“Actually, I can say that such historical rumors keep historical buildings alive. If the eyes of the world are on the Hagia Sophia today, it is definitely because of the rumors and urban legends,” he said.

“According to Orthodox belief, Constantine’s mother, Elena, dreams of the Weeping Column. When the emperor went to retrieve holy goods from Jerusalem, Elena brought that column from a garden to the Hagia Sophia. According to belief, this column piece is believed to be a remnant from the hill of Golgotha, where Jesus was crucified, as there was a pit of tears opened by the Virgin Mary when Jesus ascended from the cross. For this reason, the Orthodox people try to feel the tears of the Virgin Mary by putting the index finger of their right hand into the pit as a ritual.”

On the other hand, one of the most striking symbols of the Hagia Sophia is undoubtedly the four angels on its ceiling. When the face of Seraphim, one of these angels, was revealed, it received great attention in the press. According to mythology, it is an angel with six wings guarding the throne of God. Another noteworthy factor is the belief that Jesus may be resurrected in the Hagia Sophia. According to legend, the cross and nails used to crucify Jesus were brought from Jerusalem by the emperor and preserved in Hagia Sophia. Figures, drawings and mosaics in the Hagia Sophia support this.

“When Seraphim’s face was revealed, the media was talking about the gender of the angel. Some of them thought that it was a child while some thought that it was female. In fact, angels have no gender. With its six powerful wings, this angel is always ready to fulfill any order given by God. Looking towards the qibla and east, there are two mosaic angels on the right and left, whose faces are covered with stars. But the two mosaic angels on the west façade are frescoed additions to complete the symmetry. So there were two mosaics in the original. According to belief, on the day of judgment, they will wait for Jesus,” he said.

“In addition to the nails of the crucifix, the Virgin Mary’s leather belt of her dress is believed to protect Istanbul as it was found hidden in a church in Balat. Later, located in the west of Hagia Sophia, in the Chalkoprateia Church, Mary’s dress and leather belt were preserved,” he added.