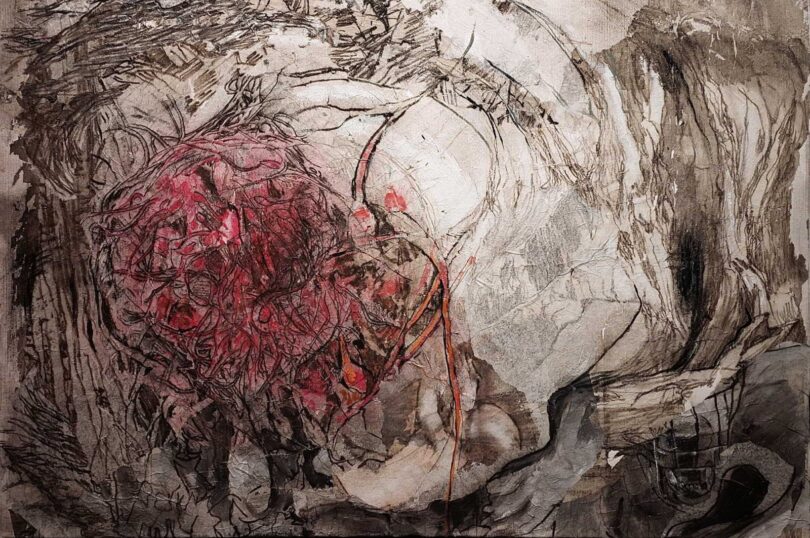 ISTANBUL : Hope is the defining feature of humankind: We hope for the future, and that hope is one of the driving forces behind the human spirit. That is the theme of Burçin Erdi’s latest work, which is now being hosted by Labirent Sanat under the exhibition aptly titled “There is No Gene for The Human Spirit.”

Musing on the themes of her work, Erdi said: “While I struggled through inclusive nature descriptions what I encountered was the realization that what looks like an end is actually a start. For me, death is a start … Isn’t the birth of the human the initiation of their death?”

Erdi touched upon the decisive effect that the opposing and contrasting nature of birth and death have had on her paintings. To put it simply, they shaped her production. Is it not precisely this awareness of this finitude that distinguishes humans from other living beings? Our compulsion to face death causes anxiety, which is one of the main dilemmas of life. Anxiety that arises at some point in our lives as a profound crisis of existential meaning reveals our responsibility to choose who we are and inspires us to change our lives. That’s how Erdi perceives it.

The hope for the future felt by the individual who leaps forward in uncertainty is one of the driving forces behind the human spirit. Hope provides the motivation for a person to be the individual they want to be, to endure difficulties, to overcome these difficulties and to progress. This is the defining feature of our species, according to Erdi.

When we take away hope for whatever reason, aren’t we destroying a part of humanity? What if a person’s future was determined not by their own choices, destiny, luck, ambition, desire, passions or intelligence, but by the choices of their parents? Would such a determination leave hope in one’s life? Who would be responsible for a life, an existence constructed by someone else? Is it possible to talk about the authenticity of a life that is shaped out of our own will? These are all questions that echo through her work.

We see newborn children and fetuses at the center of scenes of nature like forests and caves in Erdi’s paintings. This relays the idea that the place we may perceive as a forest or cave at first may inevitably be a mother’s womb.

Erdi’s exhibition takes its name from the line “there is no gene for the human spirit,” which the character Vincent – a man not engineered by gene editing in a world where genetic engineering has turned everyone into superhumans – utters after he faces difficult times in the film “Gattaca,” a 1997 sci-fi drama directed by Andrew Niccol.

Dualities such as birth and death, nature and human, human and animal, human and machine, good and bad, beautiful and ugly, mind and body, and natural and artificial are hidden concepts that trigger Erdi’s intellectual processes.

The exhibition “There is No Gene for The Human Spirit” is hosted by Labirent Sanat until Jan. 14, 2023.