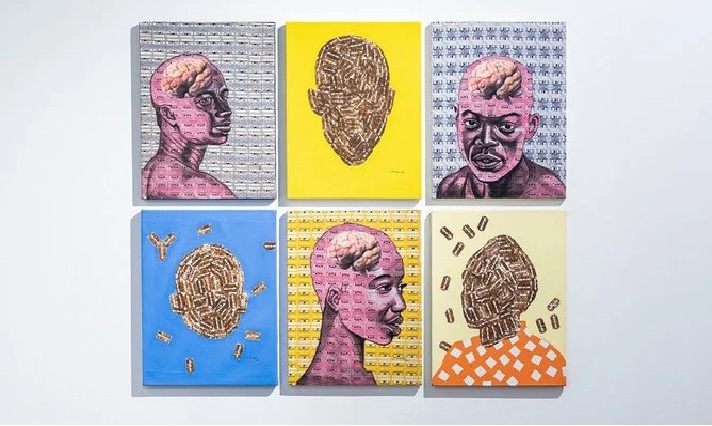 DUBAI: In a warehouse at Alserkal Avenue — Dubai’s arts district — a group of 11 emerging artists from the Democratic Republic of Congo recently displayed their work in a week-long exhibition titled “Breaking the Mold.” The title was a reference to the attempts of the artists — all former students of the Academy of Fine Arts in the DRC’s capital, Kinshasa — to escape the restrictions of their academic training.

The exhibition was staged by Yetu Management, an organization that promotes Congolese art and which recently opened its own gallery in Kinshasa.

“It seems there’s a lot of curiosity about art from Africa. I heard people saying they don’t get to see enough of it in Dubai, which hopefully we can change,” the gallery’s director Daria Kirsanova told Arab News. “We are now thinking about coming back with another project in 2023 to keep the conversation going.”

“Breaking the Mold” was just one of an increasing number of art events in Dubai and Abu Dhabi in which African art has made an appearance.

At the recent Abu Dhabi Art fair, there were several first-time participants from the African continent, signaling a growing appetite for art from Africa in the UAE.  For example, Kó, an art space in Lagos, Nigeria, run by Kavita Chellaram, participated for the first time physically, after a virtual participation in 2020.

“We want to engage in cross-cultural exchange between Africa, North Africa and the Middle East,” said Chellaram, who showed both modern and contemporary Nigerian artists.

Cape Town-based THK showed for the first time at the fair, presenting a solo booth by Abdus Salaam, an artist who converted to Islam at the age of nine. His sculptural works convey a “mystic abstraction,” according to the gallery.

Afriart gallery from Kampala, Uganda, participated for the second time, showing works by Uganda-based artists Mona Taha and Sanaa Gateja priced at between $4,000 and $30,000.

Efie Gallery, founded by Ghanaian family Valentina, Kwame and Kobi Mintah, is a more-permanent fixture in the UAE art scene. It recently celebrated the first anniversary of its establishment at Dubai’s Al-Khayat Art Avenue. It is the city’s second African art gallery; the first — Akka Project — opened in 2016.

In the year since it opened, Efie Gallery has hosted seven exhibitions, including the acclaimed Ghanaian sculptor El Anatsui’s first solo show in the city, and a collaborative exhibition with the UK auction house Christie’s featuring work by El Anatsui alongside fast-rising Ghanaian artists Isshaq Ismail and Yaw Owusu.

Efie Gallery’s success is partly due to the increased demand for African art in the international art market.

According to a recent edition of ArtTactic’s Modern and Contemporary African Artist Market Report, exploring auction sales between 2016 and 2021, African art has increased in popularity, with sales increasing by 44 percent in 2021, from $50 million in 2020 to $72 million last year, and with contemporary art galleries around the world increasingly eager to show work from the continent.

“The rapid expansion of the gallery’s extensive program is testament to the contemporary art scene here in Dubai,” Kwame Mintah told Arab News. “The collaborative approach of government, institutions, private stakeholders and collectors alike further positions art as a key contributor to the region’s (cultural) and economic development.”

The gallery is currently showing El Anatsui’s monumental bottlecap work “Detsi” at the Arts Club in Dubai and a solo show by Yaw Owusu — running until Dec. 20 — which includes work he created during a residency at the gallery over the summer.

Next up, Efie Gallery will show “The Art of Advocacy” — an exhibition of images by Ethiopian photographer Aida Muluneh, including an exclusive never-before-seen photograph — that runs from Jan. 12 until Feb. 24.