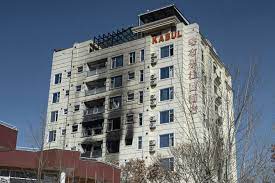 ISLAMABAD (AP): The militant Daesh group has claimed responsibility for a coordinated attack on a Chinese-owned hotel in Afghanistan’s capital that left three assailants dead and at least two of the hotel guests injured as they tried to escape by jumping out from a window.

Beijing on Tuesday advised its citizens in Afghanistan to leave the country “as soon as possible,” following the attack.

The militant strike on the Kabul Longan Hotel on Monday afternoon sent plumes of smoke rising from the 10-story structure building in the heart of the city, according to images posted on social media. Residents reported explosions and gunfire.

Taliban forces rushed to the area and blocked all roads leading to the site in the central Shar-e Naw neighborhood. Khalid Zadran, the Taliban-appointed spokesman for the Kabul police chief, said the attack lasted several hours, followed by a clean-up operation.

Hours later, the regional affiliate of the Daesh group — a key rival of the Taliban since they seized power in Afghanistan over a year ago — claimed responsibility for the attack.

In a statement carried by one of the militant Telegram channels used by Daesh, the group said two of its members targeted the hotel because it is frequented by diplomats and owned by “communist China.”

The statement further claimed Daesh attackers detonated two bags with explosives that were left in the hotel earlier, including one in the main hall, and set fire to a part of the hotel. The militant group offered no proof for its claims.

There were conflicting reports as to the casualty numbers.

Taliban officials said three assailants were killed; the Daesh claim said only two of its members took part in the attack, identifying them by name and posting their photographs.

According to Zabihullah Mujahid, the Taliban government spokesman, two foreign residents were injured when they jumped out of windows to escape the fighting.

But the Emergency Hospital in Kabul said in a tweet it received 21 casualties, including the bodied of three people.

China demanded a “thorough investigation” and urged the Taliban government “to take resolute and strong measures to ensure the safety of Chinese citizens, institutions and projects in Afghanistan,” Wang said.

The Chinese Embassy in Kabul sent its team to the site to help with the rescue, treatment and accommodations for the victims of the attack.

“In view of the current security situation in Afghanistan, the Ministry of Foreign Affairs once again advised Chinese citizens and institutions in Afghanistan to evacuate from Afghanistan as soon as possible,” Wang said.

The IS regional affiliate — known as the Islamic State in Khorasan Province — has increased its attacks since the Taliban takeover of Afghanistan in August 2021.