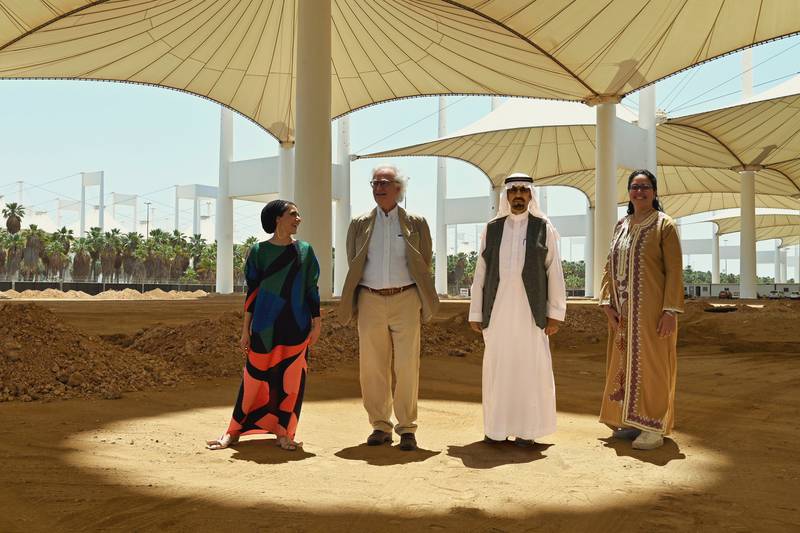 “This is not about the arts of Islam, this is about the art of being a Muslim,” says Julian Raby, curator of the first Islamic Arts Biennale, which opens in Jeddah next month.

Raby, an art historian and former director of the Smithsonian’s National Museum of Asian Art in Washington, was speaking last week in a panel discussion with his three his co-curators for the exhibition. The group had been tasked with an unusual request: to describe exactly what an Islamic arts biennial might be.

“I think it’s time for Saudi to host such an important topic and important exhibition, especially in Jeddah, because it’s the cradle of Islam, [being the gateway to] Makkah and Madinah,” says Aya Al Bakree, chief executive of the Diriyah Biennale Foundation, which is organising the event.

“It will give it the chance to tell its story — not only from a religious perspective, but from a civilisational and cultural perspective. Islamic art is always either received as geometry, or Iznik [tiles], or as very religious, and there’s an in-between that has to be told and so much storytelling that you need to kind of cover.”

The expanded focus of the biennial will take in design, architecture, crafts and other disciplines — as well as contemporary artworks — as it reflects on the impact of Islam on cultural life.

The curators likewise mirror this mix: Raby, a scholar by training, is curating the show alongside Saudi archaeologist Saad Alrashed, cultural heritage specialist Omniya Abdel Barr from the V&A, and architect Sumayya Valley, from the firm Counterspace.

The show will combine old and new: about 280 artefacts from the Islamic cultural tradition will be shown with about 60 new commissions and contemporary artworks. These will includes works by young artists such as Rund Alarabi, Alia Farid, Ayman Zedani and Nasser Al Salem, as well as established ones such as Ahmed Mater, Idris Khan and Wael Shawky.

Reflecting the importance of the plural “arts” of the title, it will also focus on other practices, such as architecture, with firms Bricklab, Syn Architects and Civil Architecture all taking part.

This is the second project from the Diriyah Biennale Foundation, a subsidiary of Saudi Arabia’s Ministry of Culture, which last year launched the Diriyah International Biennial.

The Islamic Arts Biennale, which runs from January to April, will be set in the Western Hajj Terminal of Jeddah airport. The canopied space was built by Bangladeshi-American engineer Fazlur Rahman Khan of Skidmore, Owings and Merrill in the early 1970s to house up to 80,000 pilgrims en route to Makkah and Madinah. Two terminals, the Western and Eastern, opened in 1981 and subsequently won the Aga Khan Award for Architecture. The Eastern terminal was put into use, but the Western one has sat empty for 40 years.

Aided by Prince Badr bin Abdullah, Saudi Arabia’s Minister of Culture, Al Bakree and her team at the foundation were able to secure the site for the biennial. It is now being transformed into an art space and will be used as such for other projects to come.

The terminal augurs the inclusive way Islam is being read in the biennial. As the gateway for pilgrims around the world to Makkah and Madinah, it gesture towards the fullness of the experience of the Hajj that the curators hope to recreate: from the experience of sacrifice that Muslims worldwide make to undertake the ritual, to the cross-cultural integration that stems from it, in the mixed culinary traditions and forms of art and design.

“It’s meant to feel very sensorial as an exhibition,” says Al Bakree. “You’re not only meant to only see — you’re meant to feel or to smell as well.”

The setting is also reflected in the show’s title: Awwal Bait, in reference to the Kaaba as the first house. Many of the contemporary works develop the theme of home, such as Farid’s dwelling-like structure with reeded walls that are formed from geometric patterns.

Others embrace less-recognised aspects of Islam, such as its connection to the natural and celestial rhythms that determine the hours of prayer and the months of the calendar. British artist Haroon Mirza, for example, creates a sound system within an enormous quarried stone that plays a composition — inspired, he says, by the blinking of his bike light — the duration of which is determined by the hours of sunlight in each day.

The new works, the curators hope, will create a continuity with the older artefacts that are on display as well, such as a mihrab from the 1980s that shows the lasting influence of Iranian design, or Mamluk objects such as the Qaytbay Quran. And many of the artefacts have only been seen by a few before and are leaving their home in Makkah for the first time, such as richly adorned inlaid wooden steps that formerly led up to the Kaaba.

“Millions are going to be able to see it now,” says Al Bakree.