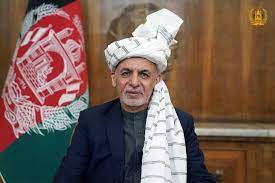 ATLANTA (Pajhwok): Former president Ashraf Ghani says the only thing all the Afghans agree upon is the education and work of women, demanding that all the ‘secrets’ of the Doha agreement should be made public.
The Ministry of Higher Education announced that girls were barred from universities until further notice.
In a statement, the MoHE said: “All public and private universities of the country are informed that based on the cabinet decision No. 28 women higher education is suspended till next order.”
Ashraf Ghani in a statement said unfortunately the current problem of women’s education and work in the country was very serious, saddening and the most obvious and cruel example of gender apartheid in the 21st century.
He wrote in his Facebook page: “The main problem is the ruling group’s illegitimacy because they are ruling in an undemocratic manner and have occupied Afghanistan and held the entire population hostage.”
“The responsibility for such unpleasant decisions of the current ruling group and the deepening of the ongoing crisis is not only with the Taliban, but with all those individuals, elements and institutions that organized propaganda and claimed to show them clean and said they have changed,” he added.
He said the Taliban and their “preachers” should share the hidden annexes and supplementary parts of the Doha agreement with the nation.
According to him, the question is why they cannot explain to the people the secret commitments with the US and why the details are kept hidden from the public.
He asked in what capacity the ruling group wanted to change the education curriculum of Afghanistan?
“Do they want to change the educational curriculum of Afghanistan to the curriculum of Haqqania Madarasa? Is their educational system better than Imam Abu Hanifa’s curriculum?”
“I have said many times and I’m still saying that if one girl becomes literate, she will change the next five generations and if one girl remains illiterate, she will cause the destruction of five generations in the future.
I strongly reject the claim of those foreign and domestic countries that give cultural cover to such treacherous decisions, the mothers of Mirwais Neka and Ahmad Shah Baba were literate and well-educated leaders.”
Ghani also added that he appreciated the girls and boys who protested for the right of education in Nangarhar, Kandahar and other provinces in this difficult situation.
Ghani said the current young generation (women and men) could do away with the “tyranny” for the next hundred years by strengthening their ranks, unity and consensus.